To mark the start of the academic year, on 3rd October, in the Great Hall of Karolinum, Charles University Rector Milena Králíčková met with representatives of Ukrainian freemovers, whom we have been preparing for their studies during the summer months. 250 freemovers from war-affected Ukraine, from almost all seventeen faculties of Charles University, took intensive Czech language courses. 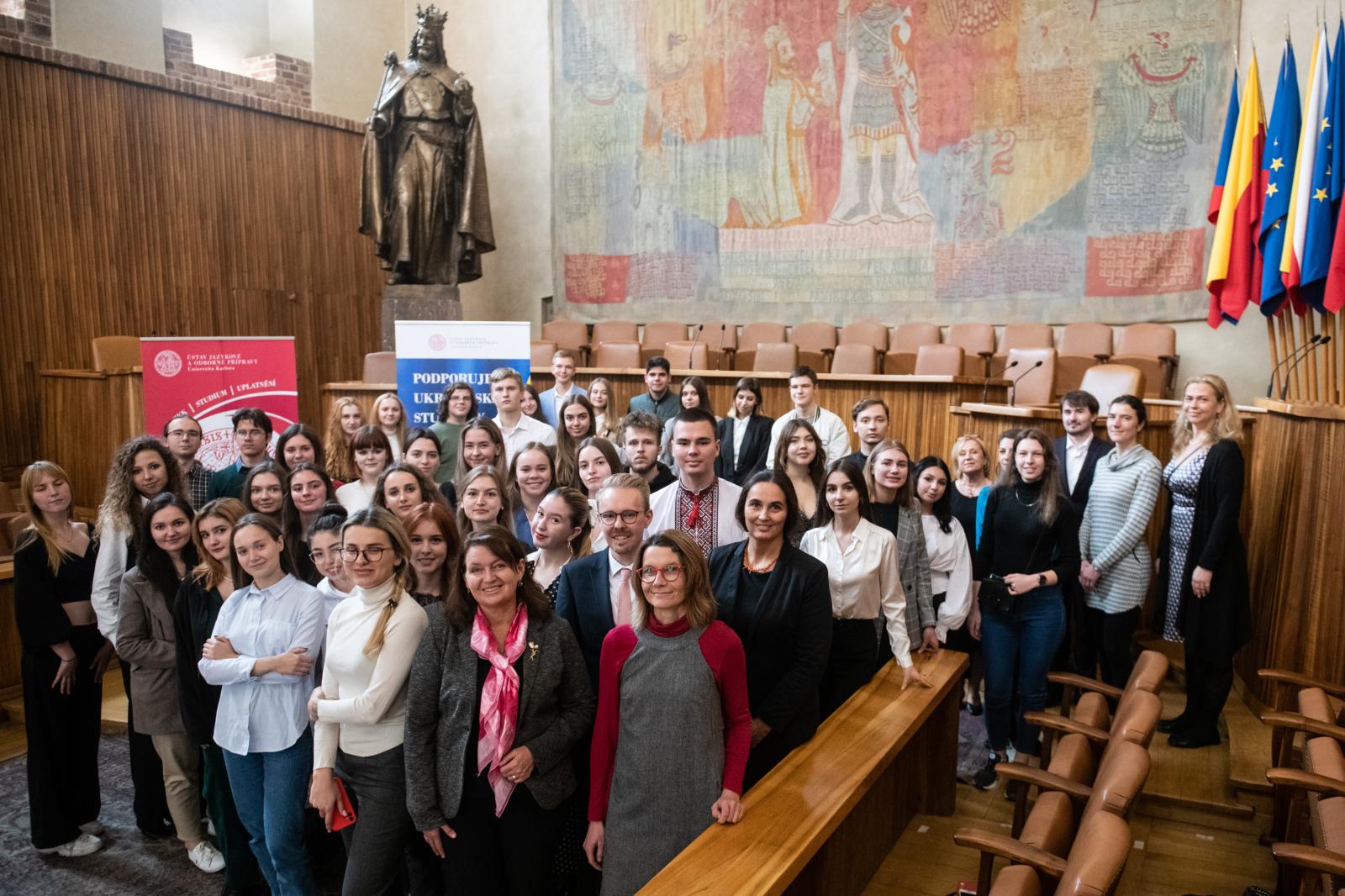 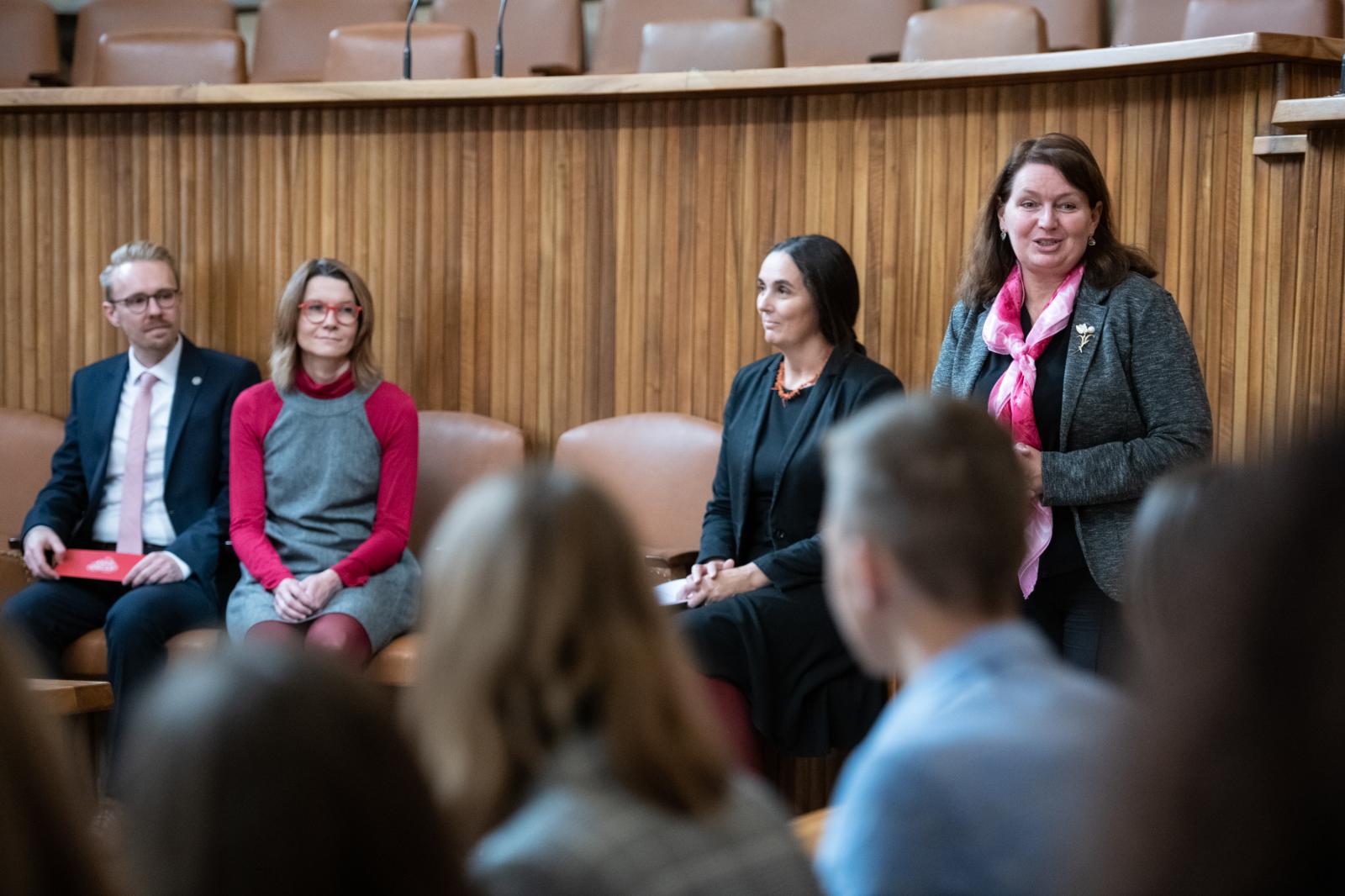 In a short period of time, Prague Study Centre, led by Petra Landergott Kalvínská, created special courses tailored to the type of faculty and programme for Ukrainian freemovers. "I am very happy that the Institute for Language and Preparatory Studies has been very strongly involved in helping Ukraine since the beginning of this year and has opened its classrooms and heart to you, who have come to us," said Charles University Rector Milena Králíčková at the beginning of the meeting. 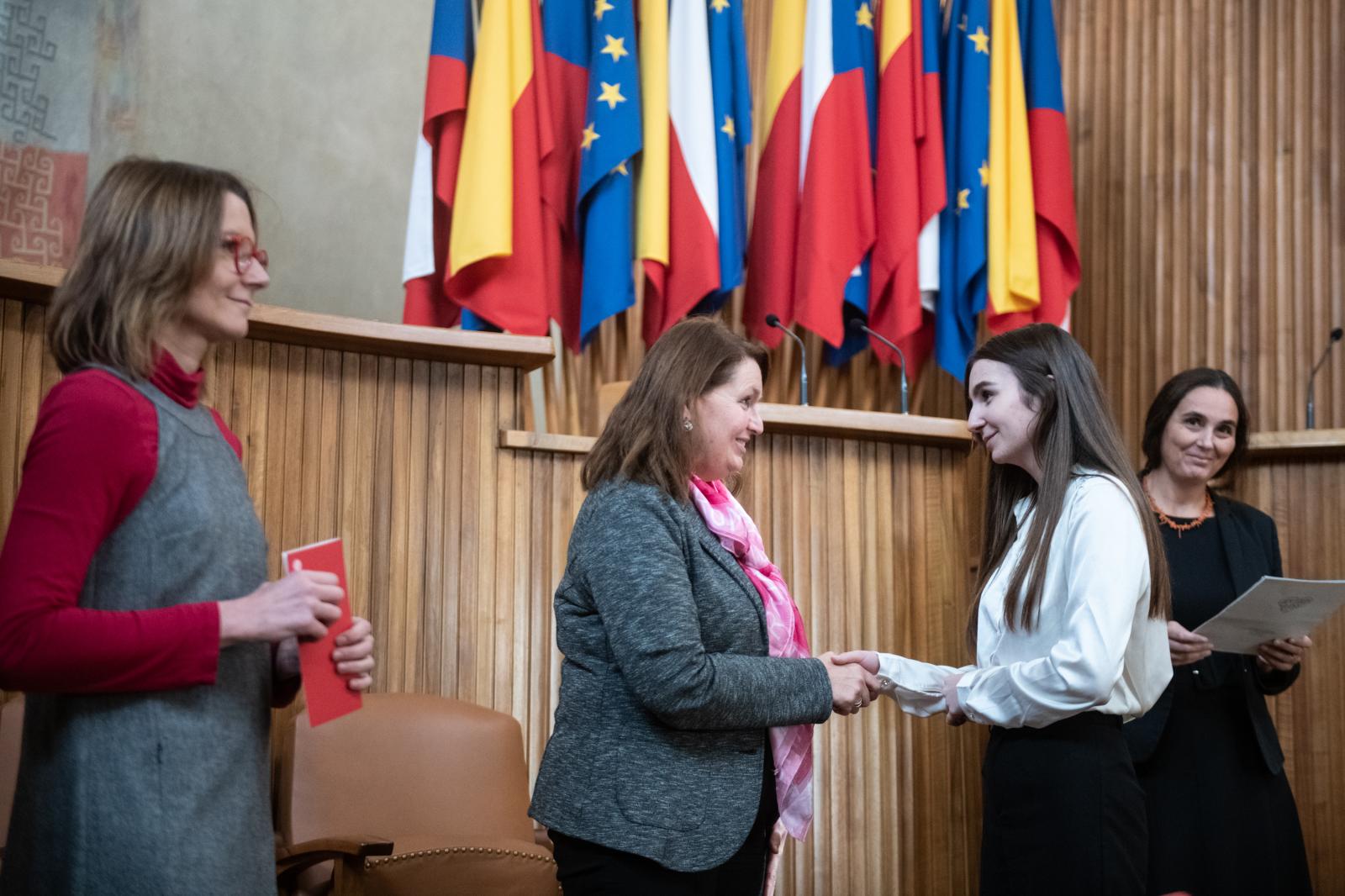 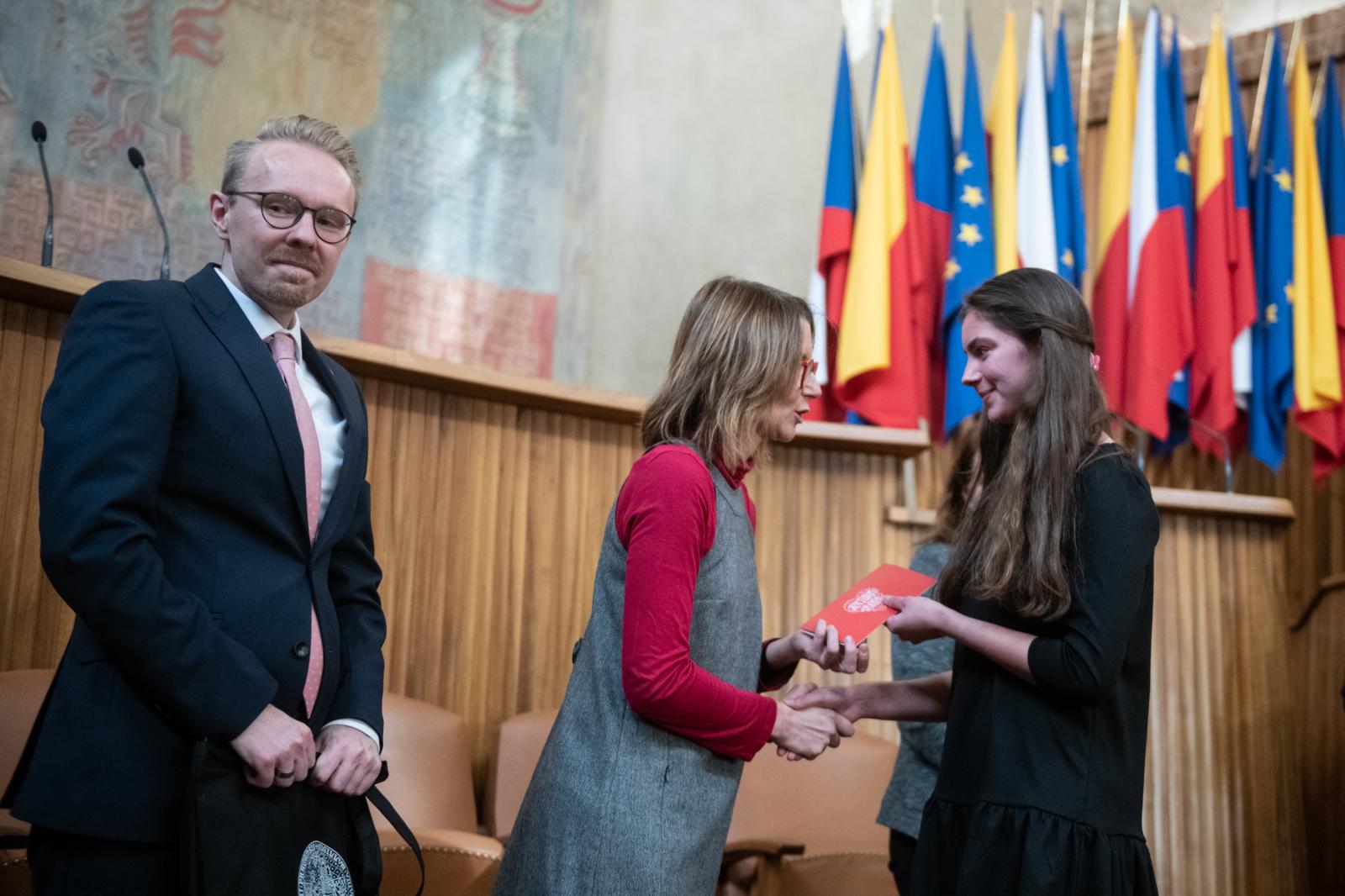 In her speech, the Rector expressed her great joy at the successful study of Czech by Ukrainian freemovers, which is evidenced by the results of the admission procedure to study programmes. She emphasized that Charles University is trying to help Ukraine not only by educating students, but also accepted Ukrainian academics to its faculties and, together with four Ukrainian universities, it has succeeded in initiating the creation of the so-called Eastern Partnership University Cluster, to which it invited universities in Heidelberg, Milan, Warsaw, Cologne, and Vienna. 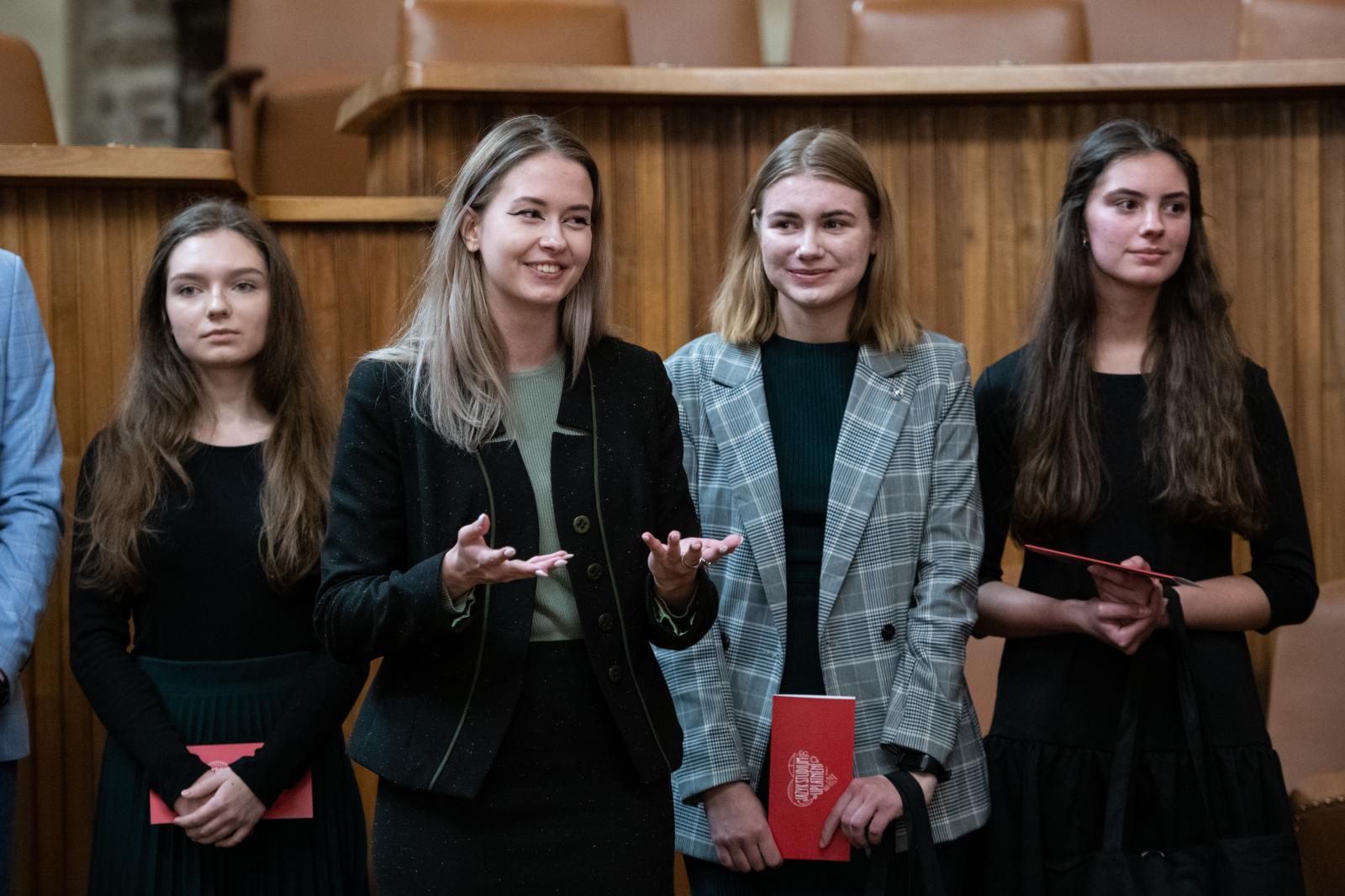 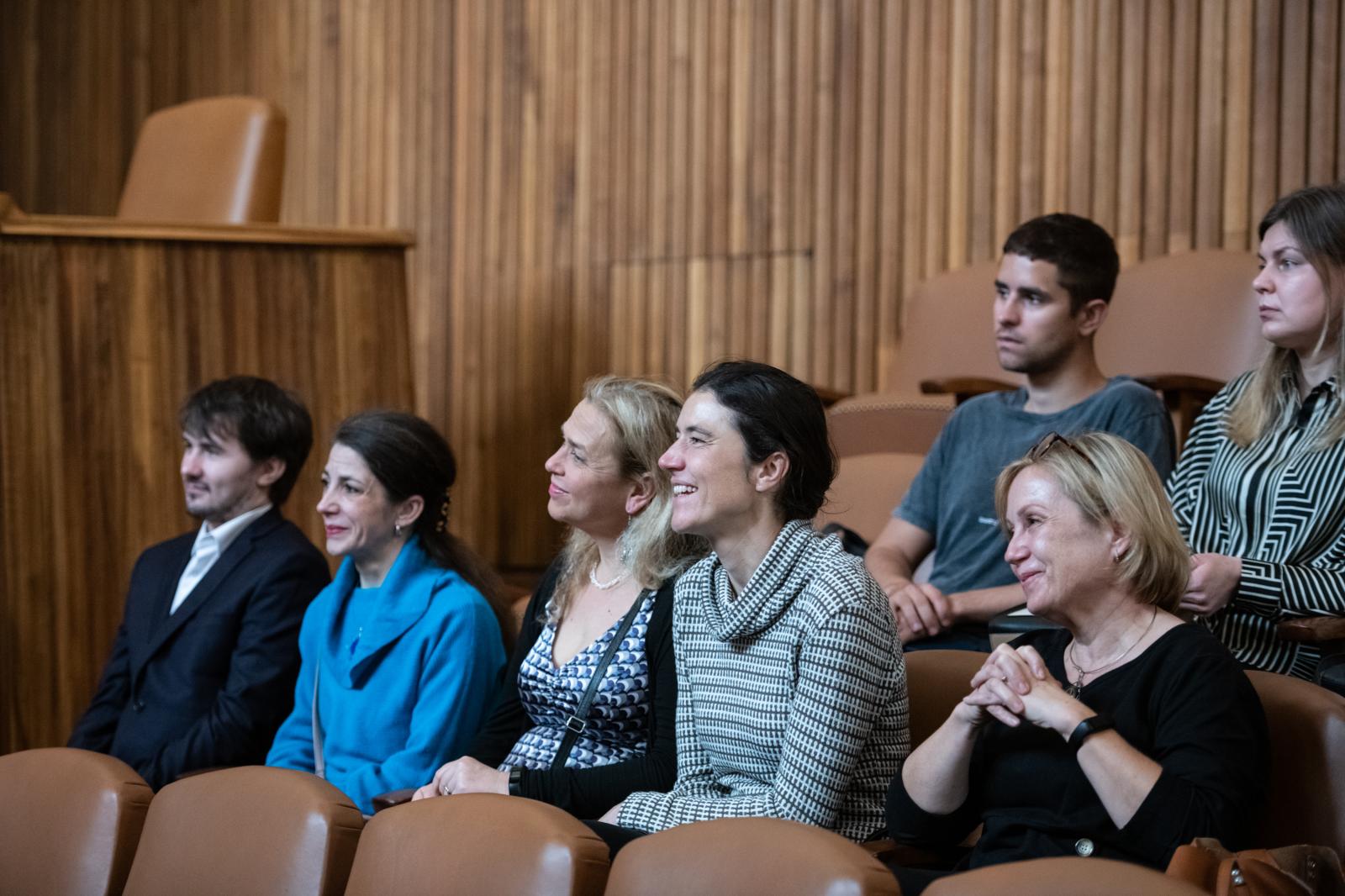 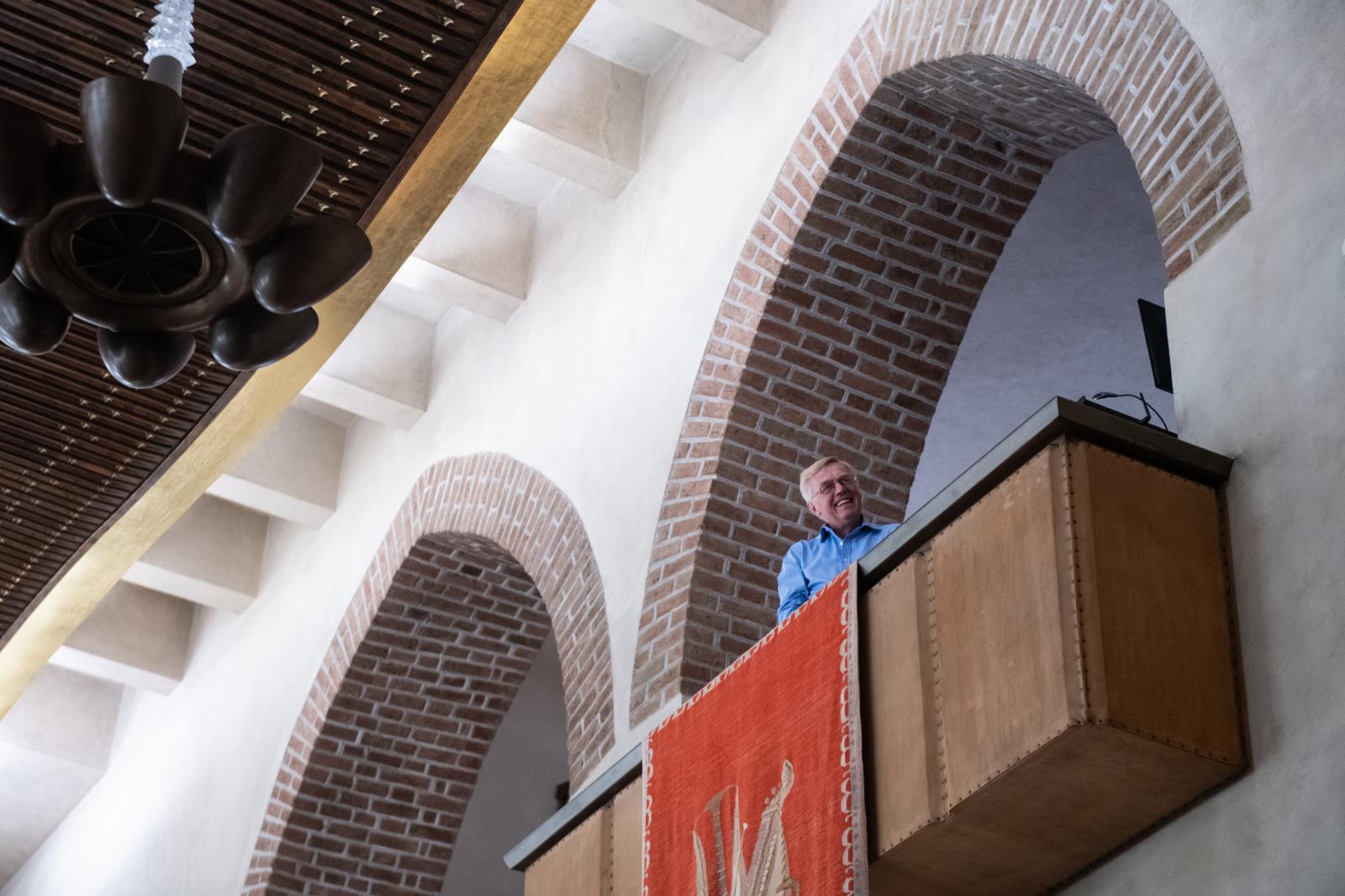 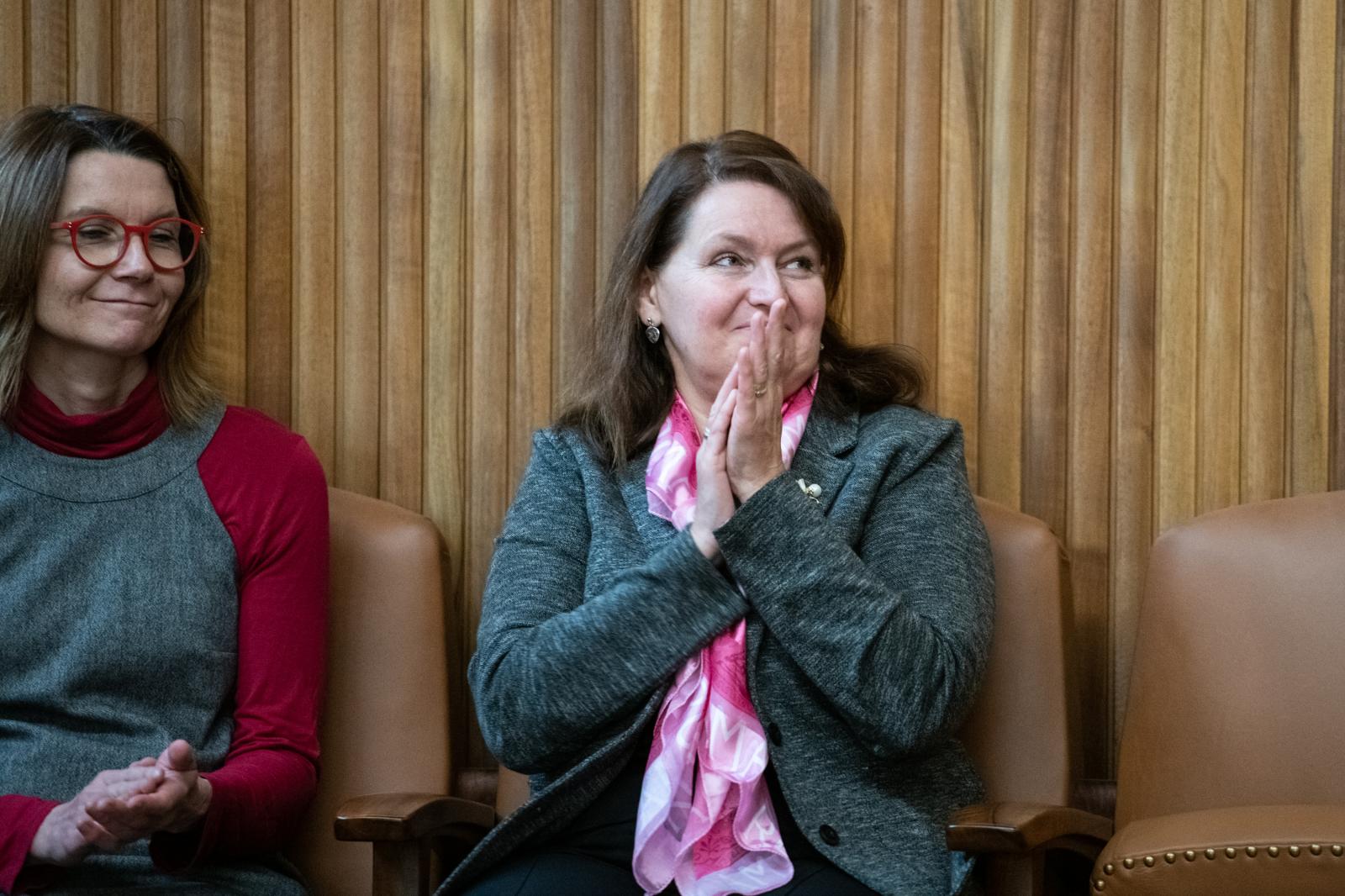 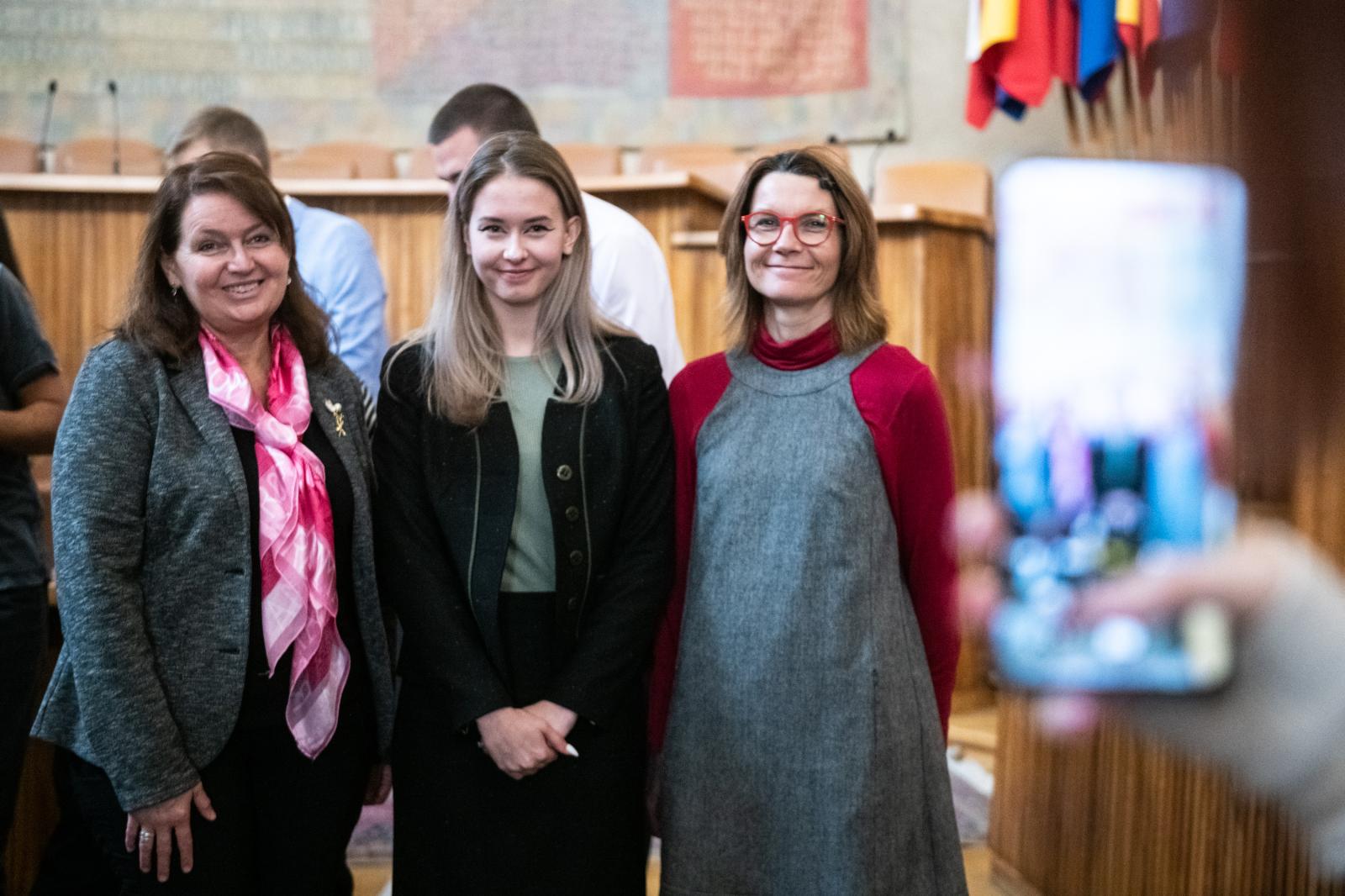 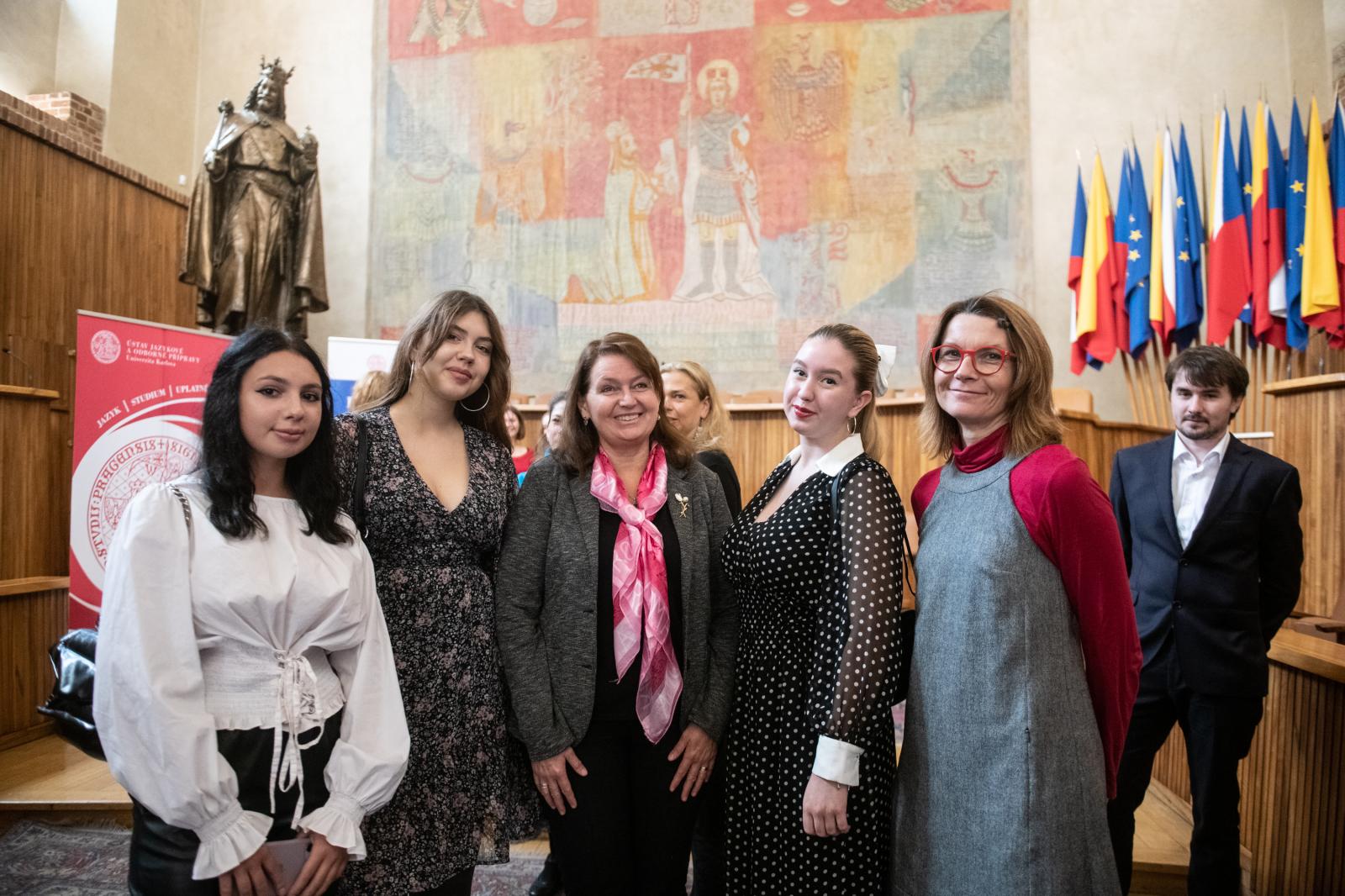 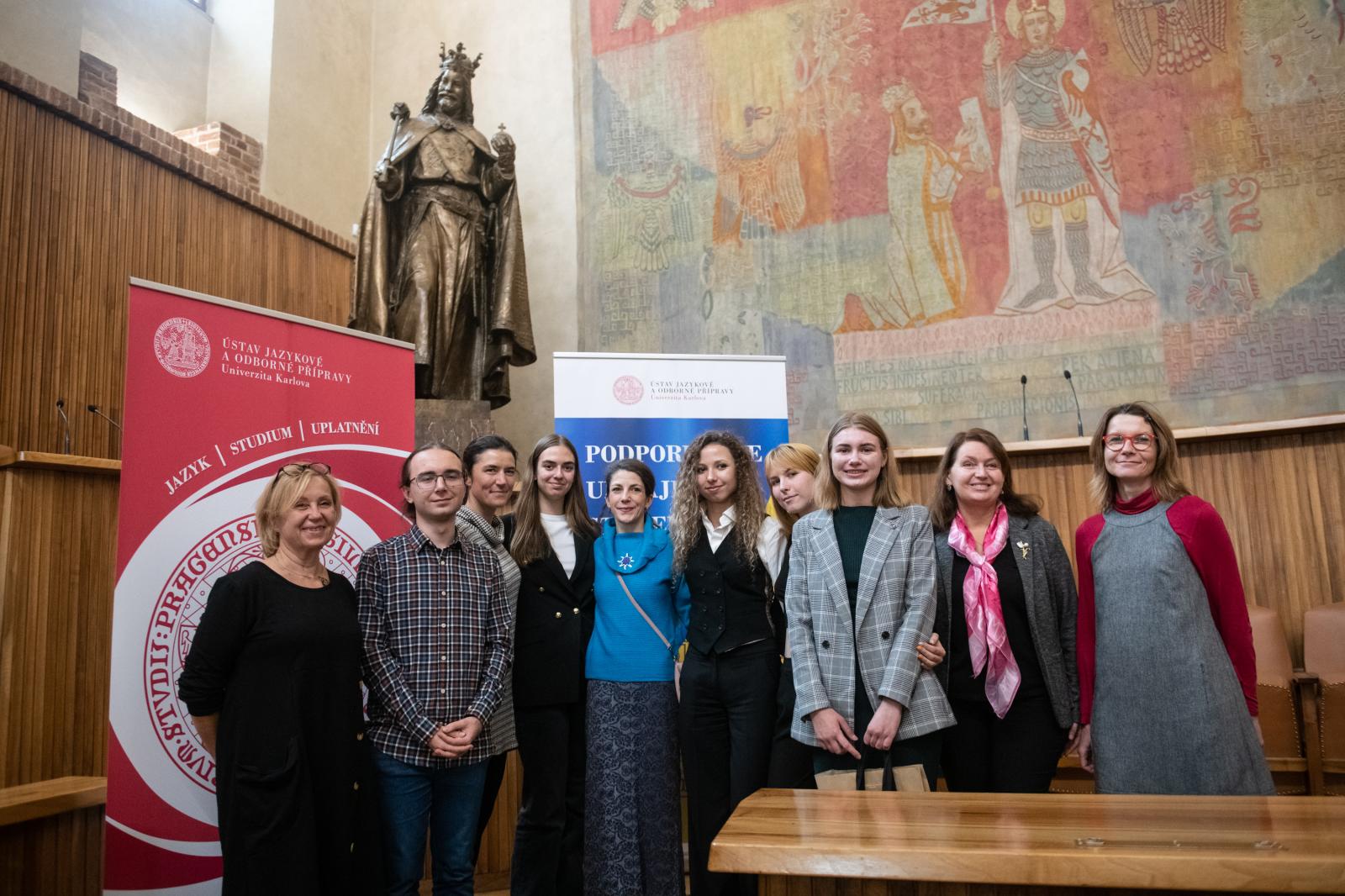 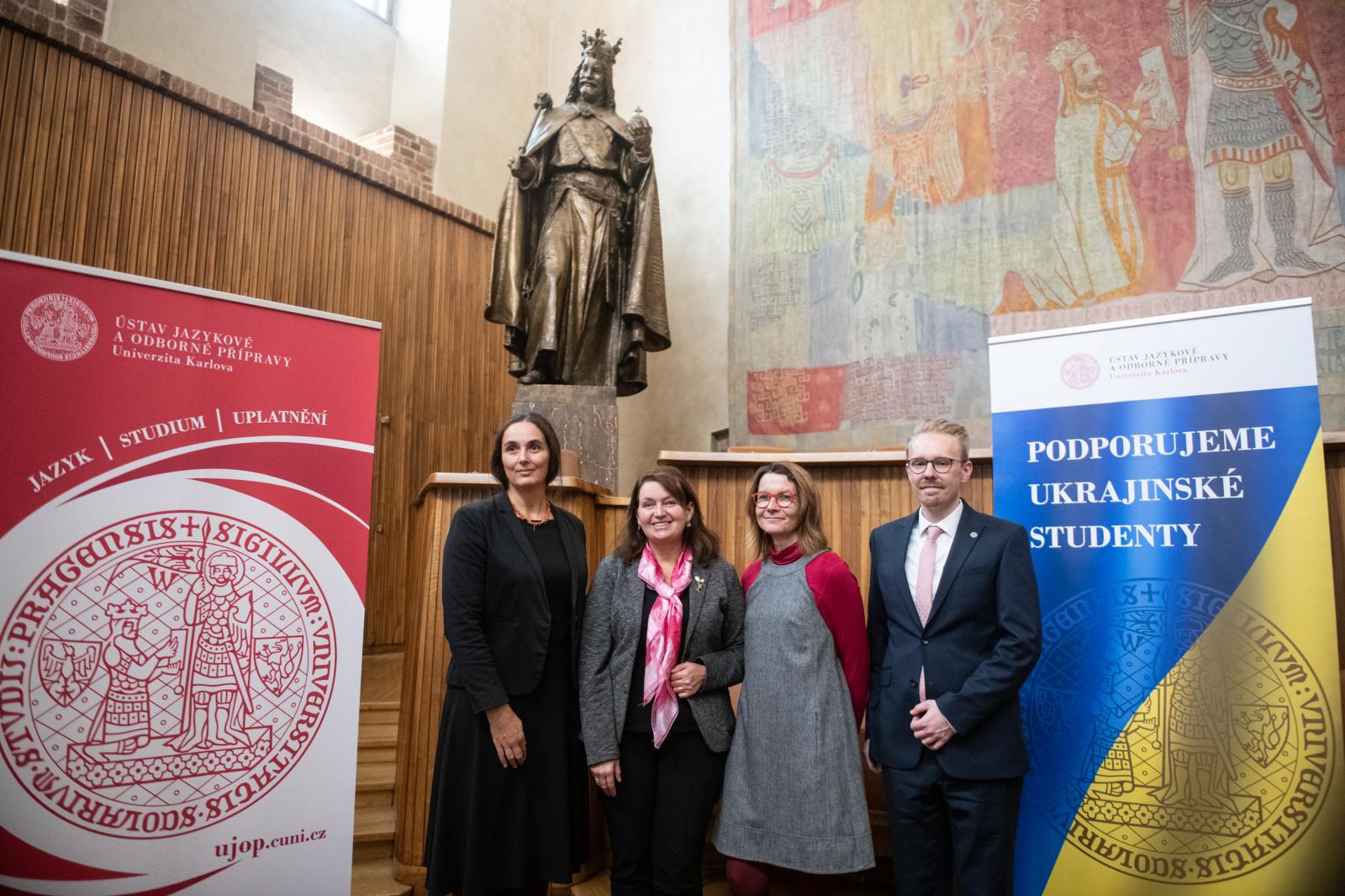 
it is an honour and a joy that we can meet here in our historic Karolinum. I am very glad that the Institute for Language and Preparatory Studies has been strongly involved in helping Ukraine since the beginning of this year and has opened its classrooms and often its heart to you, who have come to the Czech Republic. I am very happy about your academic success; I closely followed the admission process to study programmes and I have a good feeling about the numbers that were behind the successful admission to a whole range of faculties at Charles University. Each of your stories is unique and means a lot to me personally. I am happy that Charles University could also open its doors and heart and allow me to welcome you to the University with this act.


In addition to the help directed at students, I would like it to be known that we are also trying to help academics who come from Ukraine and currently most of them are already working in most of our seventeen faculties. We are also connected with four Ukrainian universities, with whom we are trying to start cooperation in Ukraine. That is, so that our teams cooperate with a Ukrainian university that sometimes needs help with education or wants to establish new research activities. Specifically, they are Taras Shevchenko Kyiv National University in Kyiv, Lviv University, Uzhgorod National University, and Dnipro University. These are universities with which we are in very active contact and we often connect with the rectors via video conference. It is for these universities that we created the so-called Eastern Partnership University Cluster; we also invited universities in Heidelberg, Milan, Warsaw, Cologne, and Vienna to cooperate. We are happy to help Ukrainian universities, we want to show that we are on their side.


At the end of my speech, I would like to wish that you study well at Charles University, so that you can use all the experience, skills, and knowledge that you learn and acquire here. I would very much like you to remember your days at Charles University with a warm feeling in your heart, despite everything that is happening in your home country. I have my fingers crossed for you and I wish you very much that you can return home, to a country that will be free and will be part of Europe. I wish you, but also your families and everyone who stayed at home, a lot of health and strength and that you can be reunited. I look forward to our meetings within the academic community of Charles University.